A Bridge Too Far?

[MINOR SPOILERS] “Death doesn’t like to be cheated,” cautions enigmatic coroner William Bludworth (Todd) to another batch of (un)fortunate coffin-dodging “survivors” in this follow-up to what was purportedly The Final Destination (and still kinda is... but I'll say no more). Graciously, the producers didn’t stick with this film’s atrocious working title 5nal Destination (Five-nal?! Really?), but I still had to question whether the death-cheating splatter-series really needed a fourth sequel?

After all, the Grim Reaper may very well not like to be cheated, but neither do cinema-goers; especially not when they are paying nearly ten quid a ticket for a 3D performance such as this. With the previous three Final films so stubbornly refusing to deviate from the original’s “you can’t cheat fate” formula, it sometimes felt like you were watching the same film ad infinitum. Would director Steven Quale's - the second unit director on James Cameron's Avatar, no less - effort have the guts to innovate like no sequel had done before? 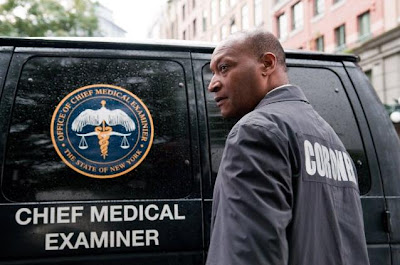 Well it's certainly got bucket-loads of guts (quite literally), but for a chunk of its running time, Final Destination 5 does retain a crushing sense of déjà vu, albeit on a more monumental scale. A group of co-workers board a bus for a company retreat, only for Sam Lawton (D’Agosto) to have a morbid premonition of the under-construction suspension bridge they are driving over collapsing and taking everyone along with it. Persuading six co-workers and his smarmy boss (Anchorman’s Koechner) to alight the vehicle, the group get to safety just in time to see the disaster actually take place. Phew – right? But how long can the survivors stay alive now they have interrupted Death’s grand plan?

The opening suspension bridge collapse is ambitious and truly epic in scale, with a superb utilisation of the third dimension to really make the grotesque catastrophe jump off the screen and impale you through the cornea. It's gimmicky, true, but this is what 3D was made for. I am, however, ever so slightly concerned by a sadistic streak which the sensational deaths brought out in me, as I found myself laughing at the most twisted and brutal deaths – and there certainly were plenty on show! Throughout the film, writer Eric Heisserer employs numerous bluffs, double bluffs and red herrings to ramp up the tension as the future corpses unwittingly meet their maker in the most inventive and unpredictable ways.

The Candyman's all-too-brief return was a nice touch (Todd was last seen in FD2 and last heard in a voiceover in FD3), while his suggestion that to dodge Death’s diabolical design the coffin fodder could kill somebody else to replace the blood debt was an overdue, but welcome, attempt to resuscitate the exhausted concept – one which depressed and obsessed employee Peter (Fisher) goes to extreme lengths to implement. But Death doesn't take kindly to being fucked around... Finally, the epilogue’s climatic twist in the tale tied the series together well, even if a gymnastic banner did get me mighty suspicious early on.


In a CR@B Shell: Y'all know the score by now, and Final Destination 5 certainly doesn't disappoint, once again offering gore-gluttons plenty of blood for their buck in a number of sickeningly spectacular scenarios which demand muchio suspension of your disbelief for fright's sake. Belated shake-ups of the formula are welcome, but whether this truly is the final Final Destination is anyone's guess.
aaaaa