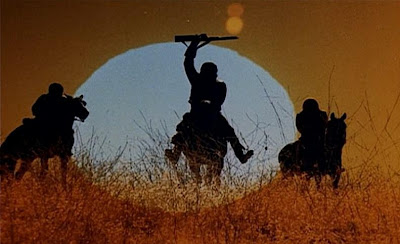 [SPOILERS] Having churned out five feature films in just five years in the late ‘60s and early ‘70s (click the links to read my reviews of those: Planet, Beneath, Escape, Conquest, Battle), you would imagine that the Planet of the Apes franchise had exhausted its potential – based as the whole saga is on just one cautionary novel from French author Pierre Boulle – so the last thing you’d expect would be a television series containing nigh-on eleven hours more monkey-men storytelling!

But even with fourteen instalments, still the series leaves you hanging. Popular though it was for ITV in the UK (even receiving a repeat run on Channel 4 in the mid ‘90s) it was broadcast in a difficult slot on CBS in the US and low ratings saw it axed whilst the drama was in full swing with six more episodes written but never filmed. The impromptu conclusion sees crash-landed human astronauts Alan Virdon (Harper) and Peter Burke (Naughton) still stranded on the topsy-turvy future Earth, their fate never decided.


Borrowing its catalytic concept from the cult-classic original film, the series documents the surviving pilots of the ANSA vessel launched in 1980 who are thrown through a wormhole and land 1,500 years hence on a world ruled by intelligent primates. Feared and wanted by the law for their “treasonous” views that humans were once the dominant species and not the docile slaves they have become, Virdon and Burke – accompanied by level-headed chimp Galen (Apes regular McDowall as his third character in the series) – escape imprisonment and go on the run, optimistic about finding the technology to send them home. 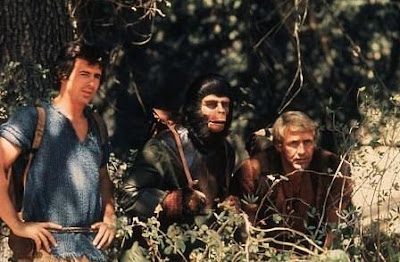 Although the show follows a vague arc, most episodes start and end with the fugitives on the run, before they encounter trouble or must beg for a hiding place in a remote colony from the gorilla search parties sent out by police chief General Urko (Lenard). It makes the episodes somewhat interchangeable and easily accessible, although a few later episodes such as “The Deception” – for reasons of time-saving, no doubt – open with the motley outlaws already in the care of a human or sympathetic ape family, which initially baffles and makes you wonder what you’ve missed.

Pilot episode “Escape from Tomorrow” includes various references to Charlton Heston’s iconic character Taylor and the uncanny similarities between the events in 1968’s Planet of the Apes and the ones now unfolding. Orangutan counsellor Zaius (Colman, doing a fine job replacing Maurice Evans) recalls the mindboggling affair of ten years ago, giving the impression that this series is set along the same timeline – conveniently forgetting that this timeline was eradicated with the nuclear bomb which wiped out the planet in first sequel Beneath. D’oh!

A further inconsistence to the films is that if we are to believe that this is set in a post-Taylor society, then why can the human slaves speak? In the first two films humans were dumb and mute wild animals oppressed by the simian race; they only found their voice in the alternate timeline which saw Caesar overthrow the gorilla uprising and set out a more equal cohabitation (as seen in Battle). My suspicion is that series show-runner Anthony Wilson okayed this break from cannon to allow for a more diverse range of adventures. After all, the show would be rather dull if only three of the characters ever spoke!

Like with any serialized production, the strength of episodes fluctuates throughout the fourteen episode run. Many stick to the same basic theme (oppressed humans good, tyrannical gorilla’s bad) but even those bold enough to deviate – such as the brave-but-controversial “The Liberator” which sees misguided humans sacrifice their own kind using poisonous gas bombs – do so with variable success. 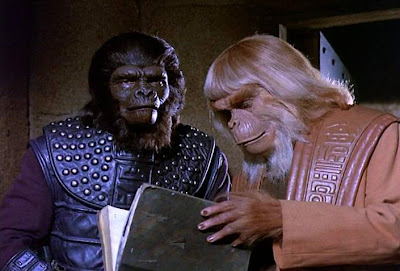 Nevertheless, the production values are extraordinary for a small screen project with an assortment of large unique sets (Central City, the ruins of war-ravaged settlements from our time in the Forbidden Zone, underground subway stations, remote farming communities, etcetera) and countless monkey masks/make up which look no less effective than they did on the big screen.

The ease with which costumed actors mount horses and engage in physical combat is admirable (the over-egged fight scenes often look incredibly painful for all involved), while I can forgive the blatant prop shark edited rather obviously with underwater stock footage of the ‘gods of the sea’ in slave labour tale “Tomorrow’s Tide” – the show is nearly forty years old, lest we forget!

The lead trio undoubtedly hold the series together; they are an amiable and dedicated team with independent and identifiable traits. Virdon is the determined but sensible leader; he’s more mature than Burke and has a wife and family at home who he’s dying to see again. His co-pilot is the bubbly ladies man who often had me smirking at his teasing banter; he’s less certain of their future than Virdon but that doesn’t stop him making light of their dire situation. Galen – now an enemy of the state having consorted with humans – is a loyal but free-thinking chimp who is only too happy to help his new-found friends. He is often the reason for their continued survival. Plus, the franchise wouldn’t be the same without Roddy McDowall!

This four disc Region 2 DVD boxset from 2003 is a nicely presented package with vibrant menu screens and a variety of language and subtitle options. However, it does little to justify its “Collector's Edition” tag, with only a trailer for the original film and a trailer for the feature films boxset release as bonus features. 20th Century Fox's promises that individual episode teasers would be included proved fruitless, nevertheless, even in its vanilla form, this is still well worth the sub-£10 price tag.


In a CR@B Shell: Often predictable but never tedious, Planet of the Apes – The Complete TV Series is a welcome expansion to the franchise with a plethora of resourceful and imaginative adventures sprinkled along its all-too-brief journey. Regularly more enjoyable than the weaker film entries, it’s a pity the narrative was never concluded as it feels like only half a story left as it is.
aaaaa
Created by ~ CR@B Howard ~ at 11:36