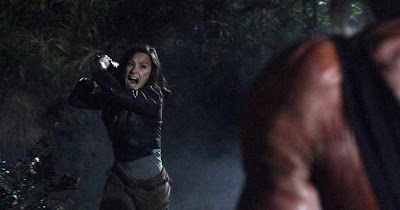 Following immediately on from Hatchet's abrupt mid-scene conclusion [sic], Danielle Harris steps into Tamara Feldman's sodden shoes as lone slaughter survivor Marybeth Dunston in this sick slasher sequel to Adam Frozen Green's retro-inspired cult splatter hit – a small-but-cocky film which prided itself on not being a sequel, a remake or “based on a Japanese one”, but now seems to be the start of an irrepressible franchise (Hatchet III is due next year, and there's the inevitable talk of it being shot in 3D).

An expansion to “hatchet-faced fuck” Victor Crowley's (Kane Friday the 13th Hodder) tragic legend starts things off promisingly by giving reason to the seemingly senseless murder of Marybeth's father and brother at the start of the 2006 original, while reciprocally giving purpose to Tony Final Destination Todd's eccentric junk-hawker Reverend Zombie, whose gravel-voiced character is granted a lot more screen time after his blink-and-you'll-miss-it cameo last time around.

Convinced by a jaded but resolutely determined Marybeth to almost immediately return to the Louisiana swamp she only barely escaped from alive mere hours before (with a less-than-sound excuse to collect the bodies of her slaughtered kin and, if he's hanging about and actually can be killed, exact revenge on the deformed bayou butcher, too), Zombie rounds up a gang of gun-totin' red neck 'ard nuts to join the suicidal expedition, under the pretence that they are heading into Crowley's murderous haunt simply to bring back Zombie's tour boat which his inexperienced assistant (Parry Shen) lost on Marybeth's less-than-rosy first trip. 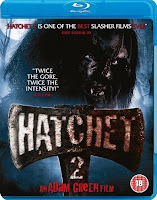 It is here that Hatchet 2 picks up the pace and returns to safe/predictable territory, with the group of boorish, uncharismatic stereotypes (one of them is even called Cleatus for gawdsake!) being picked off in ever-more imaginatively twisted manners. If depraved bloodshed with a self-aware wink to the audience is all you crave then Adam Green more than delivers with this second swing of the axe, but I found it disappointingly unprogressive, as if the young writer/director simply chose the safe “more of the same” route after realising how much money – and fame – he garnered from the first iconic schlockbuster.


In a CR@B Shell: It's a shame that the neat additions to Victor Crowley's mythology weren't simply interwoven into the undersized original as they would have elevated that out of predictability and saved us from watching the exact same film all over again. Hatchet 2 delights in gleefully warped and ever-more extreme carnage, it just carries the unmistakable stench of unnecessity along with it.
aaaaa
Created by ~ CR@B Howard ~ at 02:12