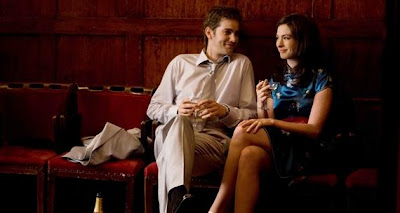 Oxford students Emma (Anne Hathaway) and Dexter (Jim Sturgess) meet – and very nearly have a one night stand – on the night of their university graduation in 1988. Emma is a quiet but sincere Yorkshire lass whilst Dexter is an ostentatious cad with an eye for the fairer sex, and yet, against all odds, a lifelong friendship is formed on that July night, one which we revisit on the same date every year for the next two decades.

As the years roll by, fashions change, fortunes deviate, jobs, lovers and acquaintances come and go, but Emma and Dex endeavour to remain in contact. Alas, sometimes life gets in the way of even the strongest bonds, and we come to fill in the gaps of the tumultuous, tragic and touching rollercoaster that is their “will they/won’t they?” relationship by way of our snapshot glimpses into these growing – but not necessarily maturing – young adults.

The fact that Danish director Lone An Education Scherfig begins her filmic conversion of David Nicholl’s bestselling novel with a seemingly innocuous bike ride in 2006 before spooling back to the catalytic first encounter, clues us in to the palpable significance of this year, so we are consciously counting down until its return with a pervading sense of expectant foreboding. Of course, if you’ve read the book you’re already prepared, but the on-screen impact is still heart-wrenching

Much criticism has been flung at Hathaway for her attempt at a northern accent, and while it does vary in its strength – occasionally even making her sound like she is imitating an upper class stereotype – it was never so inexcusably painful as to distract from the engaging love story unravelling before us. Jim Sturgess, who I had little prior awareness of, was a revelation as Dexter, a man who has a brush with small-time fame before dive-bombing into the depths of despair.


In a CR@B Shell: As a sharply-focused but far-reaching character-driven drama, One Day’s potency lies in its full-bodied and relatable individual arcs. David Nicholls incorporates the full spectrum of life, love and loss into a compassionate and authentic romance which gives you faith in love conquering all even when time pulls you in divergent directions.
aaaaa
Created by ~ CR@B Howard ~ at 09:42