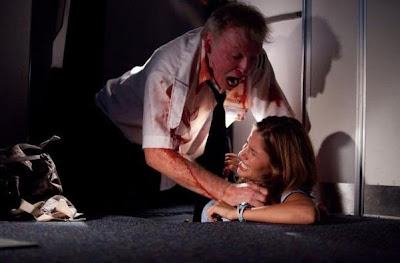 As redundant remakes go, 2008's Quarantine is up there with the most pointless of them. It's not a substandard film by any stretch, it just didn't need to be made. It is by-and-large a shot-for-shot replica of superior Spanish P.O.V. zombie horror [REC], but with characters speaking in English for Western audience's too lazy/stubborn to read subtitles.

The one area in which the Hollywood adaptation differentiated from its source material was that it removed any suggestion that the zombification of the trapped tower block residents was at all sacrilegious or supernatural. When Spanish sequel [REC]² (reviewed HERE) followed that very path to a wholly surprising but no-less satisfying end, assumptions were that Quarantine 2 was a no-go; after all, it would have been impossible to suddenly piggyback onto the “demonic possession” plot and still make sense.

And so it was something of a surprise to find out that Hollywood were making a follow up; albeit a direct-to-DVD project which was completely separate from [REC]² and it's divergent mythology. Quarantine 2: Terminal, as the title suggests, moves the action away from the claustrophobic locale of the cordoned-off apartment building, following an independent group of people as they board Trans Sky Air night flight 318 from LAX to Nashville – on the very same night that the authorities take extreme measures to contain the mystery ailment in downtown LA. 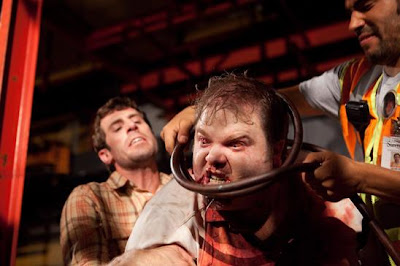 Upon hearing the synopsis, I was beyond tempted to title my review “Flight of the Living Dead” or “Plane Deadly”, however the crew only remain on board for a mere 20minutes, with the deterioration and uncontrollable behaviour of passenger Ralph Bundt (Back) causing the Captain (Curran) to make an emergency landing before the petrified travellers alight into an abandoned terminal, only to discover that the exits are locked and they are isolated in quarantine...

I suppose it would have been a very short film had the crew remained airborne for the duration – the toilet and cockpit aside, how many places are there for a plane-load of people to hide from rampaging flesh-eaters? – but it couldn't have been any worse than Snakes on a Plane. My fear that without an original notion for the spread of the plague would leave Quarantine 2 no better than the glut of bog-standard B-movie genre flicks which inundate the bargain bins every week thankfully proved to be unfounded, as writer/director John Pogue has concocted a novel concept which ties in well with the original Quarantine and sets this series apart.

To say any more would diminish the twists, red herrings and double bluffs which are prevalent throughout this impressive low budget entry. But rest assured that the cosmopolitan characters are varied and have arcs all their own, while the dead-eyed, foam-gushing victims may not be the most terrifying I have ever witnessed but they do pose a very real threat to the shrinking survivor's safety. Finally, the discovery of a pair of night vision goggles leads to a proficient nod to the handheld camera technique employed in the original but dropped here; a further example of the inventiveness normally absent from such generic fare.


In a CR@B Shell: By no means a zenith in the zombie genre and not a patch on [REC]², nevertheless, as far as straight-to-shelves horror sequels go, Quarantine 2: Terminal impresses for crafting a back story all its own which ties into its derivative predecessor but doesn't rely upon it to succeed. Nifty, dynamic and expansive, this flight from hell isn't the excruciating plane w[REC]k it could so easily have been.
aaaaa
Created by ~ CR@B Howard ~ at 11:39