Rise of the Rebel Resistance

On a dustball backwater world oppressed by the might of a tyrannical overlord (Prowse), a young farmboy (Hamill) inadvertently intercepts a distress call from a Princess in peril (Fisher) and is thrust head-first into a galactic conflict where he must overcome great tests of strength and endurance and enter the “belly of the whale” (well, a super-deadly battle station, at least) in his hero-defining battle against evil, aided on his noble quest by a wizened old mentor (Guinness) and a motley band of courageous new friends (Ford, Mayhew, Daniels, Baker).

This simple synopsis, an exquisite redressing of the mythical and archetypal ingredients key to literary analyser and philosopher Joseph Campbell’s narrative paradigm “The Hero's Journey” (AKA. The monomyth - read more about it HERE), is the humble beginning of the biggest film franchise of all time; a globally prominent brand which has grown more powerful than auteur George Lucas (and his bankers) could possibly have imagined. Even now, almost 35years after it first hit screens as a small, unknown family fantasy flick, the power of the Force shows no signs of subsiding.

Of course, despite being the first of the series to be filmed, A New Hope isn’t technically the beginning of the story proper (the numeric denotation Episode IV may have given that away – I can't imagine how puzzled early audiences must have been reading the opening crawl), but fans would have to wait some 22 years for The Phantom Menace (1999), Attack of the Clones (2002) and Revenge of the Sith (2005) to rewind a generation and lay the (over-)excessive groundwork to this browbeaten Jedi-less galaxy brought to its knees by a rampant Dark Side. Viewed independently, this earliest effort does a fine enough job of setting the scene and cluing the audience in to this extensively dense and colourful diegesis.

“I've been waiting for you, Obi Wan. We meet again, at last. The circle is now complete. When I left you, I was but a learner; now I am the master.”
“Only a master of evil, Darth.”

Watching Episode IV in sequence makes you appreciate the retrofitting which took place with the prequels all the more. Off-hand references to the Clone Wars which sparked your intrigue when you first watched this film have now been brought vibrantly to life – even if we can now tell when “Old Ben” Kenobi is holding back the truth and telling white lies to protect young Luke Skywalker; a lad surely fated to learn the ways of the Force and wind up battling the Sith, given his bloodline.

“A young Jedi named Darth Vader, who was a pupil of mine until he turned to evil, helped the Empire hunt down the Jedi Knights. He betrayed and murdered your father”

Whereas the thickly-plotted politically-powered prequels were weakened by a necessity to cram too much in, A New Hope’s strength lies in its universal accessibility. Children flummoxed by sparring senators and legalized treaties are thrilled by daring rescues and swashbuckling battles: good versus evil in its purest form. This product of the seventies is also aided by its solid tangibility: this galaxy far, far away may be populated by all manner of kooky alien beings and flying space vessels, but it looks authentic and lived in. The CGI-heavy newer films may *look* spectacular, but they are far too glossy and, thus, far too unrealistic because of it.

Rewatching this in 2011, it's interesting to note the regression, over time, of Lucas’ sense of humour, highlighted all the more by an episodic comparison between the original and prequel films. While quirky metallic counterparts R2-D2 (Baker) and C-3PO (Daniels) are hardly reserved in their idiosyncratic repartee (“Don't call me a mindless philosopher, you overweight glob of grease!”), they are ambassadors of taste and decorum when put side-by-side with lumbering fool Jar Jar Binks who can’t even dismount an eopie without getting in a friggin’ tangle and squealing like an attention-seeking child!

Persistent tinkerer Lucas’ much maligned tweaks to the 1997 Special Edition of A New Hope saw the CGI addition of an extended entrance to the "wretched hive of scum and villainy" that is the Tatooine spaceport of Mos Eisley, replete with mischievous droids exchanging playful blows. It’s in keeping with The Phantom Menace’s infantile joviality, but so incongruous to the rest of this film that it sticks out like a Gungan in the Senate. 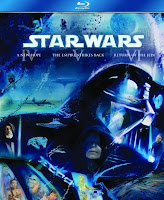 Elsewhere, the reinstated Jabba the Hutt scene remains (although it could have done with another CG update post the 2004 DVD) and George couldn’t resist further tweaks for this Blu-ray presentation, including a CGI boulder in front of R2’s cave hide-out and a different sound effect for Obi Wan to holler when he frightens away the easily startled Tusken Raiders. They’re so inconsequential you wonder why the discontented director even bothered – particularly when the image still jumps awkwardly whenever a lightsabre is activated, an issue made all the more noticeable in HD.


In a CR@B Shell: I'm not condoning his belated post-production, but no matter how much George Lucas soils the original with his ceaseless modifications, I will never tire of his iconic and beloved sci-fi classic. A New Hope is just so timelessly accessible, universally likeable, enchantingly magical and imaginatively inspiring that I could watch it time and time again – and it still isn’t my favourite of the series!
aaaaa
Created by ~ CR@B Howard ~ at 11:10