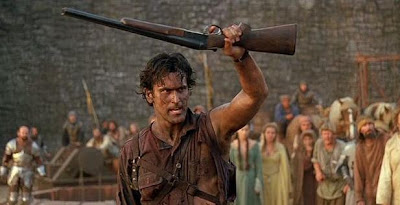 Talk about going from one extreme to the other: whereas 1987's Evil Dead II (reviewed HERE) was only too happy to recycle all that I loved so much about Sam Raimi's original cult splatter flick (reviewed HERE), this belated third instalment moves about as far away from that monotonous log cabin in the woods as you could possibly believe; transporting everybody's favourite brainless-but-endearing hardware store employee, Ash Williams (Campbell), back to the year 1300AD to battle demonic deadites side-by-side with Lord Arthur (Gilbert) and his unsurprisingly bewildered knights.

But the feudal venue isn't the only noticeable digression in Army of Darkness – the tone is decidedly more slapstick, too. That's not to say that either of the previous two parts ever took themselves in the least bit seriously (dancing skeletons and possessed hands attacking their owner are just two examples of unreserved inanity which instantly spring to mind), but the sniggersome humour has been ramped all the way up to eleven in this trilogy closer. The cynic in me would say it's likely to disguise the fact that the blood and gore have been modulated at the rating-conscious studio's behest, but it's not that noticeably tamer (even if the Theatrical Cut on the UK Optimum blu-ray is suspiciously skimpy; the credits roll on just 75mins).

Just to clarify (and go a fraction off course): the much meatier and bloodier Director's Cut is available as one of the disc's extra features, but it wasn't treated to an HD remastering and the sub-par standard definition quality is often ropey and at times scarier than the shemps on screen! This was a curious decision, and I'm somewhat unsure of which edit is considered definitive, but it just goes to show that no matter how popular a film – or how famous the director – the studio still retain power in this money-driven industry. After watching the main feature, I did skip-play my way through the extended version so to compare the more noteworthy differences between the two, and I'll discuss my thoughts on the disparate conclusions towards the end of my review. 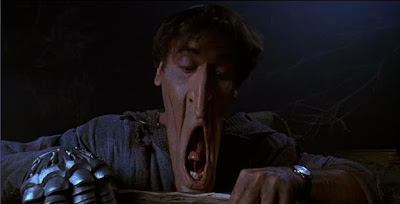 Back to the film itself, and the Necronomican – that's “Book of the Dead” to you and I – once more takes centre stage, with Ash determined to track down the flesh-bound tome to unlock its secrets and return himself to the present day and his less-than-heroic day job at S-Mart ("housewares"). Problem is, once he locates the tricksey blood-written blighter, the bonehead forgets the incantation he must chant before picking it up (d'oh!) and medieval England is flooded with a legion of reawakened skeletal warriors who lay siege to Arthur's castle under the command of Ash's deranged evil doppelgänger (who grew from an eye on Ash's shoulder before separating into his own disgusting entity – lovely!). Bugger.

Amongst the fleeting film's many stand-out moments: Ash lays waste to a pit-dwelling she-bitch with his iconic chainsaw arm-piece; later – in a nod to the previous films – he takes refuge from the evil spirit roaming the land in an abandoned windmill (in the woods?!), only to be attacked, Lilliputian-stylee, by a barmy army of mini-Ash's. His revolutionary pimping of both a new metallic hand (to replace the one which he lobbed off after it attacked him in the middle movie) and his busted Oldsmobile into a wooden war-machine on wheels are two crowning moments worthy of much fan adulation. Yeah, there are other characters on screen, but this is definitely Ash's film (small wonder then, that the UK releases were re-named Bruce Campbell vs. Army of Darkness). Did I mention he gets the girl (Davidtz), too? 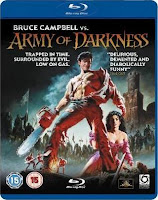 Whereas the Director's Cut ends on a wry riff of Planet of the Apes (well, that's what I took from it, but I am ape-sessed at the moment!), the rewritten “happy” ending shown in the Theatrical Cut sees Ash return to his own time (and his beloved job) as a cheesy, cock-sure hero amongst retail workers ("Hail to the king, baby"). I'll no doubt be lambasted for stating this, but I actually preferred this ending – even if it wasn't Raimi's original vision – as it left the threat of evil returning ever-present, whereas the time travel dilemma of the Director's Cut – despite ending things more decisively – felt like a downbeat dead-end to a bonkers series of crazy capers which deserved to go out with a smile.


In a CR@B Shell: Demented doesn't even cover it, but damn this film is one helluva fun, hyperactive medieval joy-ride. Cheeky and freaky but boisterously charming with it, even after a worrying degree of studio interference, Army of Darkness is still a warped classic which far outstrips its lazy (if popular) predecessor to end the cult trilogy on a high.
aaaaa
Created by ~ CR@B Howard ~ at 13:21