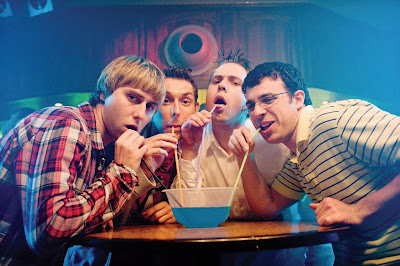 Will (Bird), Simon (Thomas), Jay (Buckley) and Neil (Harrison) – those four lovable bumders from E4’s hit high school sitcom – have graduated from the small screen and from Rudge Park Comprehensive. But before these hapless boys become men and either take themselves off to Uni (in Simon and Will’s case) or set up a business alongside Rio Ferdinand selling car stereos to the rich and famous (as perennial bullshitter Jay outrageously suggests), there is still one more rite of passage for them to complete: a lad’s holiday.

It’s almost a cliché, such is the expectation that every big screen spin-off (or holiday special) of any TV soap or sitcom simply must make the most of the larger budget and longer running time by taking its clutch of well known characters out of their familiar suburban comfort zone and giving them a new lease of live abroad: Bigger. Better. Bawdier.... err: brighter?

Series creators Beesley and Morris deliver just that by packing the socially awkward teens off to Party Island central - the throbbing coastal resort of Malia in Crete - for two weeks of sun, sand, sex, booze, girls, sex, girls, sun, booze and… sex. With Jay’s recently deceased grandfather’s inheritance in their pockets (and other less accessible places), it’s time for the self-appointed “Pussay Patrol” to leave their school-day reputations behind them and go on the prowl – pity their hotel is a shithole, then, and mopey Simon is still hung up on on/off sweetheart Carli (Head).

They may now be eighteen, but don’t expect these vulgar oiks to have grown up since their disastrous camping trip at the tail-end of series three. The Inbetweeners Movie is still rammed to the gills with more crass, vapid banter than you can shake your love stick at (well, except Jay, who’s somewhat less than gifted in the trouser department – as we all very visibly discover). There’s also a fair helping of heart to cushion the off-colour but harmless humour as the unlucky-in-love quartet try their best chat-up lines on a group of British girls who, much to their astonishment, don’t run away at the first opportunity. Get in!

The karmic conclusion does strain credulity somewhat – there’s clearly a female equivalent for each member of the group; the likelihood of that happening in real life incredibly slim, while the supporting characters (including Carli and hotel rep James) are all made out to be obnoxious arseholes to make the core four more likeable – but you’ll be laughing too much to care. The broad gags are pleasingly consistent throughout (highlights being the sorry attempt at dancing up to the girls in an empty nightclub and head of sixth Mr Gilbert’s less than poignant farewell speech) as, rather worrying, is the amount of male nudity on show…


In a CR@B Shell: If you’re a sensitive soul then this riotous swear-fest is not for you, but beneath the boasts and bravado, these uncool kids are an endearing bunch and it’ll be a shame if this feature length adventure really is the series’ final send-off – but a least they made the most of a holiday from hell and doggedly refused to go home miserable. Chances are you won’t either.
aaaaa
Created by ~ CR@B Howard ~ at 10:07