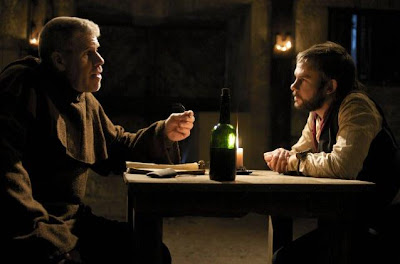 Making light work of some truly dirty dealings in much the same vein as John Landis’ tame-but-tolerable take on a true story Burke & Hare, this low budget grave-robbing period comedy – a promising debut from Irish writer/director McQuaid which pre-dates the Pegg/Serkis vehicle by over eighteen months – throws an additional ingredient into the casket some thirty minutes in when the cadavers start coming back from the dead!!

The supernatural/horror elements aren’t overbearingly dominant, but they settle symbiotically with the offbeat characterisation of immoral-but-good-natured dead peddlers Arthur Black (Lost’s Monaghan) and Willie Grimes (Fessenden). However, a throwaway scene in which a peculiarly frozen stiff transpires to be a little grey man who all too quickly is beamed up to his mothership and disregarded with a shrug does feel like a frivolous step too far for the sake of a mild chuckle.

We join the story in media res (that’s in the middle of the action for all those who don’t speak Latin), with Willie having already been executed for the crimes of tomb raiding and murder. Five hours before Arthur is due to follow suit and kneel beneath the guillotine (despite his assertion that he is innocent – of the murder charge, at least), unorthodox priest Father Duffy (Season of the Witch’s Perlman) pays a visit to the condemned man’s cell and we learn of the grisly business that brought him to this point via a series of fragmented flashbacks.

As endearing as these cheeky chaps are, Arthur’s abridged life story does feel a little meandering at times (time is precious as he nears the chop, yet he considers it imperative to describe an ale-chugging contest at the local boozer to his transcribing visitor), but the alcohol-smuggling Father reels him back on focus by demanding to know more of Arthur and Willie’s clashes with rival band of enigmatic corpse hawkers “The House of Murphy” – for reasons that soon become clear…

The film’s low budget is effectively stretched with a profusion of moody, mist-shrouded moonlit locales which are creepily atmospheric if sparsely decorated, while a neat aesthetic idiosyncrasy sees a number of artistic shots and character profiles morph into comic book-style illustrations. It’s a polished touch which helps accentuate I Sell the Dead’s fundamental tongue-in-cheek absurdity, even if it doesn’t lend itself to any narrative function.


In a CR@B Shell: An affable and distinctive calling card for filmmaking newcomer Glenn McQuaid, I Sell the Dead is a charmingly lightweight post pub time-passer which outdoes Burke & Hare on laughs, even if the zombie horror component could have done with a bit more bite.
aaaaa
Created by ~ CR@B Howard ~ at 12:09