Rebirth of the Dead 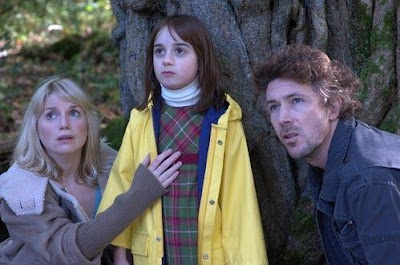 [SPOILERS] I couldn't help but smile at the irony that a film with a tagline warning “The Dead Should Not Be Woken” was the comeback feature of long-in-hiatus genre studio Hammer Films. 30 years after their last production, would the former masters of the macabre come to rue their very own reawakening?

Fortunately, The Wake Wood (as it was originally called before they dropped the definite article) garnered critical commendation upon its March release, even if that date was, rather worryingly, some 18months after it first premiered at a film festival (never a good sign). Overshadowed though it may have been by Matt Reeve's vamp remake Let Me In and the more star-studded (but similarly short-changed) The Resident, I was still eager to see what all the fuss was about with this low budget Irish resurrection chiller.

Relocating to the eponymous rural village (spelt, strangely, as one word rather than the two of the title), husband and wife Patrick (Gillen) and Louise (Birthistle) are still struggled to come to terms with the horrific death of their only child, Alice (Connolly), who was viciously mauled to death by a savage dog. After their car breaks down one night, they stumble upon Patrick's boss's remote cottage. Hoping for a phone, they are shocked to overhear a creepy pagan ritual taking place in his back yard; a ritual which brings the dead back to life. Wakewood, they have discovered, is not like other villages...

Patrick's uncanny boss, Arthur (Spall), offers the grieving couple an opportunity they cannot refuse: the chance to see their little girl again, alive and in the flesh – but only for three days, after which time she must “return to the wood”. Overjoyed at the chance to say a proper goodbye to their much-missed daughter, everything seems to be going fabulously – but happiness doesn't last forever, and Alice doesn't want to be left alone in the ground again... 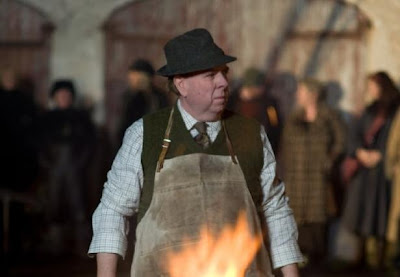 There's more than a shade of Don't Look Now in Wake Wood's DNA, not only in the theme of premature death and grieving parents (and the fact that Alice wears a mac – albeit not a red one), but also in the quirky editing, with director David Keating borrowing Nicholas Roeg's iconic unchronological flitting technique to not only contrast the before, during and after of the tragic catalyst, but also during a sex scene. It's a rather unsublte homage to say the least.

Unfortunately that is where any comparisons to the 1973 Daphne Du Maurier adaptation end, as innocent little Alice develops a devilishly sinister side, which sees her disappear into the night with makeshift weapons in hand. If the Roeg riffing was unsublte, then Keating's overuse of the claret stuff is just plain indulgant. I was left with the suspicion that the producers were worried that without a bone-crunching groin crush here or a dog skinning there, Wake Wood wouldn't even qualify as a horror, so they took the gore to hyperbolic extremes and tagged on a permanently jangling musical score to give the film the impression of tension.

Don't get me wrong, it is an effective score (reminding me of the eerie library music in Ghostbusters - with added cowbells), but it was ultimately counteracted by Wake Wood's lowly budget, which shone through far too brightly in the tones of every shot; the whites

too garish and the blacks not black enough. At times it looked like an amateur production.

Ella Connolly, too, didn't quite nail her crucial role as the resurrected Alice. She's only young, so I feel kinda bad for critiquing, but not once did she creep me out or give me the impression that she was ever truly a threat to the villagers. Her wide-eyed gaze looked wholly indifferent throughout whether she was hugging her mummy or impaling a poker through the neck of her neighbour.


In a CR@B Shell: The critics seemed to love it, but I failed to be impressed by this cheap-looking Don't Look Now for the noughties. Excessive money shots just added to Wake Wood's feeling of tacky desperation, and even Timothy Spall couldn't elevate this beyond straight-to-DVD status. So *that's* why they kept it on the shelf for 18months...
aaaaa
Created by ~ CR@B Howard ~ at 09:05