Love in the Past, Present & Future Tense

Whether avoiding pestilence in the Dark Ages, leading a go-getting career-centric life in today's metropolitan urban jungle or planet-hopping in a sleek n' sexy future-verse, one thing is guaranteed: you can't avoid the “L” word. Whether dizzyingly passionate, purely physical or some messy juncture betwixt the two, it's the universal language binding humanity together. It also handily links these three overwise wholly unrelated film reviews into one thematic whole.... sorta. 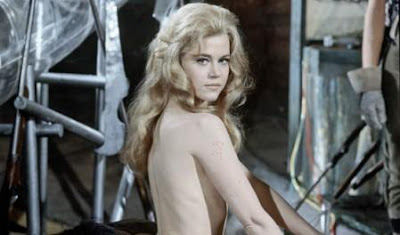 Austin Powers meets Flash Gordon in this sexually liberated sci-fi from the swinging sixties. Classic screen beauty Jane Fonda – who at the time of production was married to the film's director – plays the title role of Earth's alluring unofficial ambassador of love (read: empowered slut) in a future where our planet is a peaceful world favouring harmony and unity over violence and war.

On a mission to locate Milo O'Shea's missing weapon manufacturer Durand Durand (pronounced minus the “d”; yes, this is where the eighties popsters got their name), our hump-tastic heroine is only too happy to sleep her way around the star system, from fur-wearing loners guarding the Ice plains to blind, confidence-lacking angels trapped in labyrinths. The self-appointed “Queen of the Galaxy” finally meets her match in an “excessive machine” – A.K.A. an orgasmotron – which she overloads with her abundant desires. 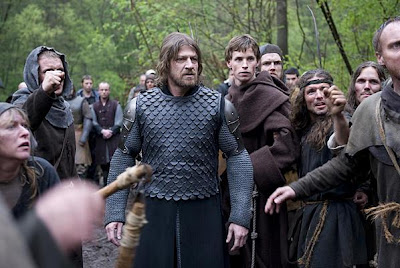 England, 1348AD. The country ravaged by the plague, young priest Osmond (Eddie Redmayne) agrees to leave his monastery and act as a guide to a group of soldiers searching for a far-off village rumoured to be miraculously free from pestilence and home to a necromancer who can bring the dead back to life.

Lead by no-nonsense knight Ulric (Sean Bean), the Christian questers must traverse the rotten land and overcome treacherous obstacles before they reach the remote marshland utopia. Suspicious of the god-fearing community, the knights nonetheless accept the hospitality of passive chief Hob (Blackadder’s Tim McInnerny) – but things are not as cordial as they superficially appear…

From cult director Christopher Smith (Severance, Creep), Black Death plays out the medieval-men-on-a-mission concept of Season of the Witch but with Centurion’s gritty aesthetic and proclivity for vividly violent and visceral visuals. When the soldiers reach their destination, things go all Wake Wood – but for all its clandestine superstition, Black Death has its armour-clad feet rooted firmly in the authentic. 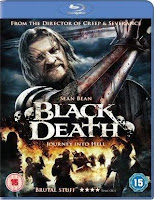 Sean Bean’s name may head the marketing campaign and his bristled chops may dominate the cover art, but this is unquestionably Eddie Redmayne’s film. It is Osmond we sympathise with as he holds out hope that he will be reacquainted with the girl he loves (Kimberly Nixon) and the actor’s vulnerability is palpable as Osmond’s heart is broken and body weakened throughout the horrific ordeals he endures. It is this that stays with you long after the bloodshed has subsided. 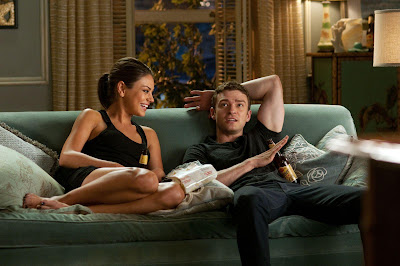 Having already hooked up with No Strings Attached (reviewed HERE), I was sceptical of what a second identi-kit sex-com in under a year could possibly offer me; but while the Natalie Portman vehicle won the race to the box office by some months, Mila Kunis reigns supreme in the “babes of Black Swan” battle with the superior fuck buddy funny flick in Friends with Benefits.

It's by no means a clear-cut victory: for all its jovial pokes at the death of the fairytale romance via a purposefully soppy film-within-the-film starring a dopey Jason Segel, this Will Gluck (Fired Up!, Easy A) directed effort still fails to avoid the happily ever after as platonic muckers Dylan (The Social Network's Timberlake) and Jamie (Kunis) realise it's impossible to do the nasty without becoming emotionally invested.

What gives Friends with Benefits the marginal upper hand is in the decent chemistry between bullish exec job recruiter Jamie and her charming magazine editor target Dylan, and the fact that – even when they finally realise they are in love – their first classification of their involvement is “best friends”. It was refreshing to see that it *wasn't* the fornication which fogged their feelings but their close bond.

Much like this rollercoaster relationship, are a few missteps along the way: Woody Harrelson raises some chuckles as Dylan's extravagant GQ art editor, but he's far too in-your-face about his homosexuality to be believable. Dylan's father's (Richard Jenkins) mental deterioration due to Alzheimer's is treated sensitively, yet there are many cruel jibes made about Dylan's difficulty in grasping basic mathematics. Finally, a string of off-hand references to real life emergency landing pilot Captain Sully (see HERE) fall awkwardly flat and lead to no narrative pay-off.