The Light(er) Side of The Force 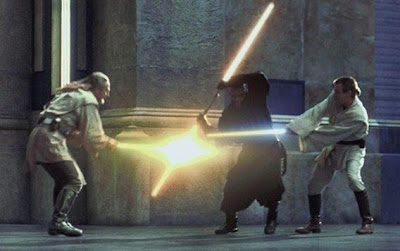 Having deliberately held off a re-watch of my all-time favourite space saga for some months in anticipation of the hotly-anticipated nine disc “The Complete Saga” Blu-ray collection (released Monday), to say I was a little miffed at Amazon when they failed to deliver my long-held pre-order on the day of release is something of a bantha-sized understatement. What, I ask you, is the point of pre-ordering – and, supposedly, guaranteeing – such an in-demand release when I could have nipped down the road and picked it up from Sainsburys both quicker and at a more competitive price? My confidence in the online giants has been rattled – but that is a rant for another blog.

To watch the saga in release order or chronological order? That is the question, and, as the focus of this first review is Episode I, those of you who were paying attention will have already guessed my answer. I can scarcely believe that the opening instalment in the “new” Star Wars trilogy is already 12 years old (where has the time gone?), but so ingrained in the public subconscious is it that George Lucas' fantasy opus is never far from the forefront of people's awareness – and thus, so very hard to forget (either for the right or wrong reasons). 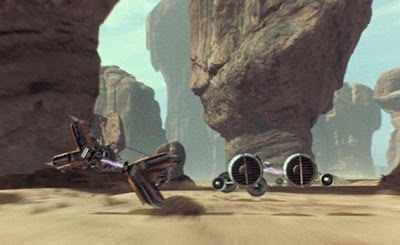 Visually, The Phantom Menace has held up magnificently – not that 1999 is all that long ago, but special effects have come on leaps and bounds in recent years – and this Blu-ray remaster is striking in the sharpness of the film's many exotic locales; from the lush greens of the Naboo grasslands to the opulence of Queen Amidala's (Portman) Venetian-style palace, from the bleached white seas of Tatooinian sand to the ethereal elegance of the underwater city of Otoh Gunga. Oh, and Yoda's (Oz) now CG, too. Lucas' vibrant aesthetic choices no doubt purposefully parallel the lighter and more hopeful mood of this opening episode: the “Chosen One”, Anakin Skywalker (Lloyd), has been found by the Jedi and is to start his training which will bring balance to the Force (well, that's the plan at least).

Given this tonal luminance, it's no surprise that some of the characters are more - how should I put it...? - playful, too (I bet you can guess what's coming now). For all the critical uproar, I personally never minded Gungan oddball Jar Jar Binks (Best) back in the day, but his ignorantly destructive blundering did start to wear a little thin on the 27year-old me. I think it's his ever-presence which is to fault; had he been in fewer scenes and played the clown less frequently, I think a greater number of the more mature audience would have been less offended by his "wude" and exhausting exuberance.

Yes, yes, before you jump down my throat, I am well aware that Star Wars is essentially a children's action-adventure series, and I'm sure plenty of kid's were rolling in the aisles at Jar Jar's uncoordinated antics and cheering as the little slave boy single-handedly beat the bad guys without completely bending the rules (“Qui-Gonn said to stay in the cockpit, so that's what I'm gonna do”), but quite how many of them understood an iota of The Phantom Menace's political-fuelled plot? It seems something of a contradiction to have frog-men stepping in poo-doo in one scene, only for senators to be discussing a vote of "no confidence" against the Supreme Chancellor (Stamp) in the next. 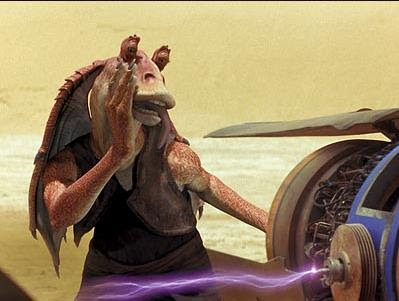 It is this schizophrenic attitude which is The Phantom Menace's biggest undoing; Lucas was clearly attempting to appease fans both young and old, old and new, but the balance is off. Those that comprehend the political implications and intricacies of the twisty, planet-hopping mission against the Sith-puppeteered Trade Federation will roll their eyes at the juvenile humour, while those that snigger at the hapless ineptitude of a tongue-tied alien will grow bored the minute the podrace stops and the lightsabres are switched off.

It certainly struck me that the film's second hour is more focused and tense than the muddly first. Once the exhilarating-but-frivolous padding of the Boonta Eva podrace has left the pudding-basined wonderkid in Jedi Master Qui-Gon Jinn's (Neeson; exuding a calm confidence) care and they head off to the concrete metropolis of Coruscant to fight the enbattled Nabooian's cause, the film tightens up on its way to the entertaining home straight. 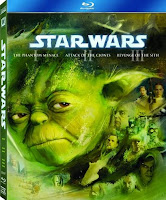 The end line, of course, involves one of the coolest characters in the entire saga: deadly horn-headed Sith Apprentice Darth Maul (Park). Dispatched by his eponymous hooded master to aid the useless Trade Federation and quash the Naboo revolt, tattooed Maul faces up to Qui-Gon and his padawan Obi Wan Kenobi (McGregor) in an electric three-way lightsabre battle, set to John William's thumping score “Duel of the Fates”. The choreography is jaw dropping and the action is thrilling and intense and it leaves a lasting impression in a way the rest of the film - for all its try-hard effort - sadly fails to do.


In a CR@B Shell: Fanboy though I may be, I'm not blinded to The Phantom Menace's faults; but I'm also not narrow-minded enough to disown a vital piece of the Star Wars jigsaw. Bogged down in weighty diplomacy whilst simultaneously striving to entertain the tots, this discordance may leave Episode I slightly unsteady at times but it doesn't derail the iconic franchise and has many reasons to be given a second chance.
aaaaa
Created by ~ CR@B Howard ~ at 09:12