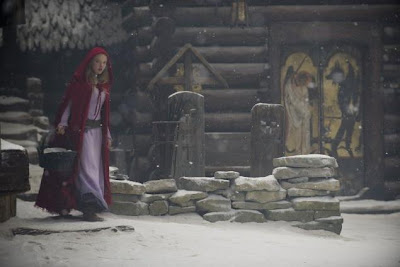 My, Catherine, what a big Hollywood budget you have! All the better to lure in the lycanthrope-hungry Twi-hards and hoodwink the hardcore horror hounds, my dear. That, in essence, is Ms. Hardwicke’s Red Riding Hood; a fairytale reimagining of the flesh-hungry wolf which purports a dark, gothic edge but favours a 12A rating, enchanting snow-steeped medieval beauty and a tediously predictable love triangle instead. Sound familiar? Well, they certainly found the right director then!

Mamma Mia’s Seyfried brings a steely twenty-first century ‘tude to the innocent “’Lil Red” (known here as Valerie), whose village – located on the edge of a menacing forest – has long made animal sacrifices to placate the hunger of a deadly werewolf. That is until Valerie’s sister is slaughtered by the beast under the blood moon and the incensed men of the village set out to slay the swine before famed werewolf hunter Father Soloman (Oldman) arrives to clean up the corpses. 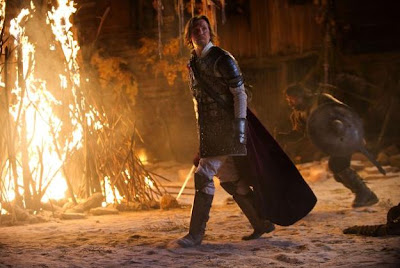 Meanwhile, Valerie is torn between the loves she bares for her lifelong soul mate, the lowly woodcutter Peter (Fernandez), and the wealthy-but-plain iron-forger Henry (Irons), whom it has been arranged she will marry. Well, I say “torn”, but there is absolutely no question as to who Valerie favours, as she sneaks off to the barn for a bit of carnal copping with the dashing lad her family disapproves of. A bit like Edward vs. Jacob in that respect, then?

It’s a shame there wasn’t more depth or dynamic to the romance, as aside from one being blonde and the other brunette, there is actually little in the way of characterisation to separate the male suitors. The film's real mystery is who the werewolf is in human form, with Soloman declaring it must be one of the villagers and Valerie's suspicions falling on everyone from Peter to the village idiot (Heppell), via her own Grandma (Christie), with her big brown eyes and isolated existence living alone deep in the woods. The ambiguity certainly kept me guessing to the very end, and the motives for the wolfman’s kills were neatly explained.

On the downside, I was less than impressed by Brian Reitzell's generic and uninvolving musical score (which usually compliments the atmosphere in brooding, fantastical fare such as this) and I howled with laughter as soon as Valerie communicated with the English-speaking wolf (think Eragon with fur, there’s mercifully no lip movement). But Red Riding Hood’s biggest crime – like its lacklustre rival male leads – is its lack of bite. David Johnson's script required more depth, more darkness and less pensive pawing at the roots of this potentially ferocious folktale. Oh, and more Gary Oldman wouldn't have gone amiss, either.


In a CR@B Shell: Not as toothless as critics would have you believe, but just too fanciful to carve a lasting impression. More ferocity and a less chimeric gloss would have transformed Red Riding Hood's whimpers into snarls and left more than the Twilight tweens afraid of this big, bad(ly CGI-ed) wolf.
aaaaa
Created by ~ CR@B Howard ~ at 13:23