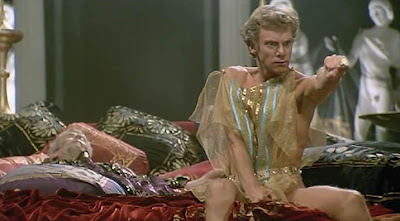 This is a genuine warning, CR@B fans: Any readers who thought Spartacus: Blood and Sand's penchant for fruity language and fruitier displays of T&A was too extreme for their chaste sensibilities – click away now. Seriously. This Penthouse co-produced picture is in a league all its own. 20,000 leagues under dignity, to be precise, and this rant– sorry: review does have to address some of these base issues in order to fully justify my shock.

But before I tackle the smut (oo-er), I will first flag up my concern over the casting: Fragile lead Malcolm McDowell didn't convince me at all as Gaius Caesar Germanicus, better known as the eponymous Caligula. Weedy and unimposing, he lacked any sense of gravitas necessary to lead an empire. Would his people really have bowed to his every demonic demand and sardonic whim? What the A Clockwork Orange actor does bring to the role, however, is a pair of authentically mad eyes, which, considering the Roman Emperor's obvious detachment from reality, does serve the immoral bastard well. 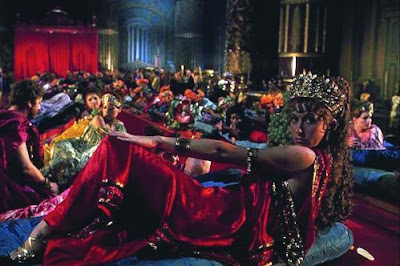 At a bum-numbing three hours, this notorious affair is a real schizophrenic failure: the “serious” drama segments concerning Caligula's murdering of his mad predecessor, Tiberius (O'Toole), and fall from grace once he has ascended to the throne and abused his power to the utmost, are overlong, undramatic and simply not in the least gripping; while the repeated insertion of shocking full frontal fetishistic sex scenes, castration, brutal murder and rape is distasteful and disturbingly off-putting to the extreme.

Supposedly representative of the decadence and debauchery prevalent in the Roman powerhouse, Caligula instead comes off as desperate – it's no wonder so many involved in the troubled three year production have since disowned what is little more than the highest budgeted porn film ever made. They can claim all they want that the explicit footage belatedly shot and inserted by Penthouse's Bob Guccione ruined their vision, but even without the all-too-obvious additions, Caligula is still an absolute mess! Almost ever other scene takes place in some new, vast and extravagant set – and yet all the camera is interested in is entwined naked bodies in all their up-close vulgarity. Trust me: you see e-v-e-r-y-t-h-i-n-g.

In one such jaw-dropping scene, Caligula is partaking in a menage a trois with his wife (Mirren) and beloved – in the carnal sense – sister (Savoy) while two random slave girls watch the incestuous depravity from a private room, becoming so turned on that they end up having lesbian relations themselves. The camera continues to dart between these two graphic displays for what feels like ten minutes too long, before jumping to the following morning as if nothing out of the ordinary has taken place. Just another day at the amphitheatre, then?!! 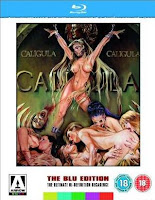 The eponymous mad-man is just so thoroughly detestable that you never once feel for this sister-fucking, mass-murdering, trust-abusing, backstabbing despot who sees no issue with torturing an innocent man until death, then encouraging his bevy of under-dressed minions to “seductively” urinate over the poor man's corpse!! Yet, when a blackbird flies into his bedroom, he squeals like a sissy!! Exactly how we are meant to embrace the “tragic” story of how his own inner circle eventually turned against him is beyond me. Just to preserve my sanity I had to view this obsene monstrosity in three instalments and I could easily have given up after each sitting. The things I do for you guys...!!