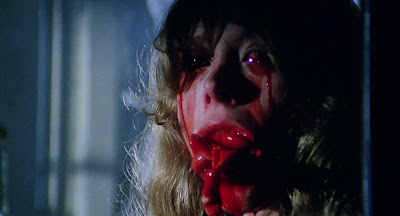 I didn't rush into transcribing my initial reaction after watching this bizarre – and understandably controversial – 1980 zombie flick on Monday night; I had to mull over my thoughts, suppress my rage and attempt to make some semblance of sense of cult Italian director Lucio Fulci's City of the Living Dead before writing my review. Of course I failed, because I've come to the conclusion that it is impossible to make sense out of a work so unconcerned with narrative cohesion that it may as well be a medley of ever-more shocking visual scares instead of even bothering to feign interest in a logical narrative structure.

The plot, for what it's worth, concerns the attempts of two concerned couples who – for reasons all their own – must travel to the remote village of Dunwich, New England to locate the tomb of a priest (Jovine) who hanged himself and thus, by committing such a grievous sin, opened the Gates of Hell (incidentally, that is an alternate title for this many-monikered monstrosity). Can the four clued-up citizens – among them journalist Peter Bell (George) and psychic Mary Woodhouse (MacColl) – close this portal to the underworld before All Saints Day, or will the undead rise to take over the earth?

Despite it's derivative title, please do not confuse this glory-stealing shambles – the first in a trilogy, no less – as a part of George A. Romero's infinitely superior "Living Dead" series. Whereas Romero used his zombies as a cleverly striking metaphor for his harsh social commentary, Fulci doesn't seem to have any clear idea of what the hell he is doing, instead throwing a plethora of grotesque set-pieces at the camera in the hope that everyone is too busy freaking out at the gore to notice nothing makes a jot of sense! Well, I did. 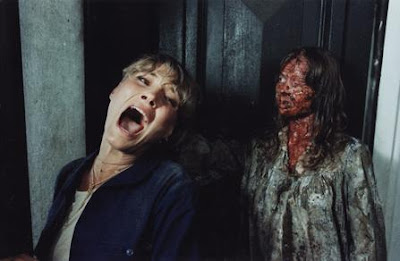 Okay, to be fair, as the film progresses and the two couples converge and formulate something vaguely resembling a plan, the disjointedly fragmented shards of narrative do start to fuse together somewhat, but by this point in the film I had lost all hope of logic and was simply watching in a gore-thirsty braindead state akin to the reanimated dead, who, I may have forgotten to mention, seem able to beam themselves in and out of thin air for no reason whatsoever – and you had a problem with zombies who could run?!

As well as teleporting zombies who seem more concerned with crushing skulls than eating them, Fulci also gets carried away with all manner of other illogical visualisations of the macabre: Mary dies – of fright – at a séance and awakens to find herself buried alive, a squatter with a fetish for self-inflating sex dolls (don't ask) finds the decomposing corpse of a baby then never mentions this again, a woman is forced to vomit up all her internal organs simply because she looked at the spirit of the dead priest, our protagonists find themselves in a storm of maggots, a wall is pierced with shards of glass and starts to bleed, a man's head is impaled on a rotating drill, and on more than one occasion women start to cry blood. Why? Heck knows, but Fulci does seem to have a tiresome obsession with eyes... 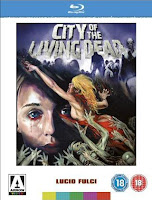 I'm sure gore-hounds will have a field day with this gleefully unrestrained freakshow (the censors certainly did), but as a film fan who appreciates a bit of meat on his cinematic bones, City of the Living Dead was an abominably shallow mess which has little to recommend it beyond an atmospheric score with funky guitar undertones. Much like Craven's sorrowful My Soul to Take, this cult “classic” feels like a lot of extremely visceral ideas were cobbled together and a “plot” worked around the carnage. And don't even get me started on the scream which heralds the end credits; as an attempt to insinuate the horror isn't over (despite it unquestionably being so) it fails spectacularly and just adds to the list of confusing illogicalities which plague this rotten drivel.


In a CR@B Shell: Sickeningly sadistic set-pieces and an atmospherically fog-shrouded ambience barely rescue Fulci's nonsensical Euro-trash from being an all-out disappointment, but don't go looking for any symbolic depth in this bizarre surrealist nightmare of a “narrative”. Avoid like the (un)dead.
aaaaa
Created by ~ CR@B Howard ~ at 10:42