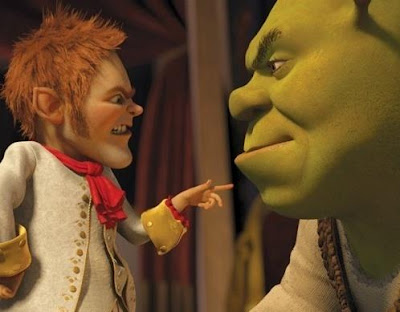 I jestingly gesticulated in my belated Shrek the Third review (linkage) that I wouldn’t get around to reviewing this fourth instalment in the well-mined franchise until it premiered on terrestrial TV sometime circa Christmas 2013. And yet, here I am, ahead of my preliminary schedule by some considerable distance; all four fairy tale flavoured films (and the Shrek the Halls Christmas special, natch) under my film hungry belt. I clearly have far, far and away too much time on my hands…

Not that such family friendly fare could ever be considered a chore to view. Indeed, Shrek Forever After is as easily accessible as any of the preceding chapters – and a mighty step up from the pastiche-crammed third Shrek-isode, which tried too hard to make everything into a spoofing nod splicing folktale influences with pop culture riffs, at the expense of a dynamic story.

Forever After makes the wise decision to go back to the original's Academy Award-winning roots, turning the spotlight back on the characters; placing their desires and requirements first, rather than working a series of gigglesome skits around them. Thus, we return to Far, Far Away to see the once-feared ogre pining for the days when he wasn’t a domesticated and loveable celebrity (“Do the roar!” a side-splittingly hilarious child repeatedly demands); when his mere presence would send mobs screaming and he was left to wallow in a mud bath in peace.

Enter the wily Rumpelstiltskin (Dohrn – sounding a lot like Jack Black), who grants the downbeat Shrek (Myers) his wish – 24hours as a “real ogre” – in exchange for a sly small print addendum that “Rumpie” is granted one day of Shrek’s life in return… his birthday. Thus, Shrek is transported to an alternate reality where he was never born. His best friend, Donkey (Murphy), is scared of this overly-friendly beast; his wife, Fiona (Diaz), is a stranger, having freed herself from the tower and become a freedom fighter for the ogre cause; and Puss in Boots (Banderas) has discarded his footwear for a life of overly pampered luxury.

By resetting the traditional, writer’s Klausner and Lemke have a whole storybook of fresh material to excavate: namely, the dissimilarities between the alternate versions of these familiar characters. It also gives Shrek a purpose: to win back the woman he loves with love’s true kiss, and it provides him with a character-enhancing epiphany: he has no reason to be unhappy with his lot in life; he has a family who adores him and friends he wouldn’t change for the world. Awh – so come the end credits of this supposed “Final Chapter”, everyone is living happily ever after. “Hallelujah, hallelujah…"


In a CR@B Shell: A fresh and fitting swan song for the band of madcap misfits who were looking decidedly past their prime prior to reinvention. Forever After doesn’t quite hit the peaks of the earliest efforts, but it is a tighter and less frenetic effort than Shrek the Third.
aaaaa
Created by ~ CR@B Howard ~ at 14:21