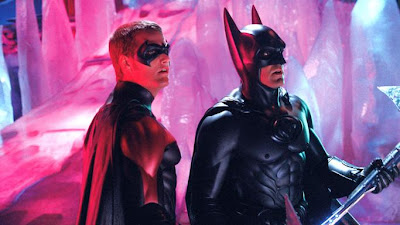 Inspired by fellow movie review blogger Andy Buckle’s recent “Worst Film of All Time” post, in which 1997’s much maligned Batman & Robin claimed the dubious honour of pole position (check out the article HERE and why not stay for a nose around?), I decided it was high time I unwrapped the cellophane from my dust-collecting Blu-ray copy and gave the film which temporarily derailed the Bat-chise a belated re-watch.

I can remember seeing the film on the big screen when it was first released some 14 years ago and I must have enjoyed it (hey, I was only 13!) as I asked a relative to buy it for me – along with the rest of the series – on VHS that Christmas. I only re-bought personal favourite Batman Returns on DVD, but when I upgraded to Blu-ray, all four (and later six) live action Bat-flicks were high on my list of hi-def purchases. I can’t even claim that this clunker was a redundant disc within a box set: I purchased them all separately!

To give the Joel Schumacher-helmed flop its dues; it does look mighty fine in HD – but then the neon-hued megalithic Gotham sets are impressively vibrant creations; Tim Burton’s towering and intimidating gothic designs exaggerated to the verge of hyperbole. That, essentially, is Batman & Robin’s downfall: it is everything that worked in restrained measures in previous instalments ramped up to embarrassingly uninhibited levels. 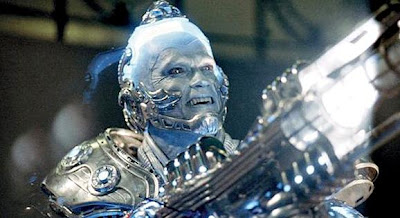 Main adversary Mr Freeze (Schwarzenegger; granted top billing above the eponymous rodent), for example, isn’t just an eccentric villain with a score to settle, replete with a distinctive disguise and a sardonic sense of humour, oh no: he’s a flat out caricature of a maniacal madman with a clunky metallic suit, blue skin and an inability to speak without spouting the cheesiest ice-based puns known to man (“Ice to see you”, “You’re not sending me to the cooler”, “What killed the dinosaurs? The Ice Age!” – I could go on!).

Back in 1997, adult Bat-fans desperate for a new live action adventure were stunned into fury as they were pelted with over two hours of the naffest and least humorous “gags” this side of a farce – even the usually sombre protagonist (played awkwardly – for the first and last time – by ER heart-throb du jour Clooney) wasn’t immune to woeful wisecracks (“This is why Superman works alone”) and corny sight gags (the Bat-card, the rubber nipples) which pandered to a child’s mentality and left the hardcore legions out in the cold (oh god – now *I’m* doing it!).

If you were to look on Batman & Robin as a kid’s flick; it’s a madcap success, fusing the bright, the bold and the wacky into a comic-book world where mad scientists all look like Albert Einstein and dangerous chemicals come in vats with “VENOM” and a skull and cross bones printed on the front. That’s probably why I liked it at 13, but this is not what audiences were expecting – or wanting – from the tortured and tragic caped crusader who doesn’t have any super-powers but is impelled on the righteous path by brute vengeance. 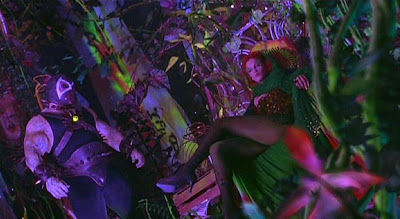 If you go in prepared, it’s not *that* deplorable. Sure, it desecrates all over Tim Burton’s dark, stylised and unquestionably superior earlier instalments, but the fact that it is so unrelentingly frenzied does, in a way, make the madness more bearable: Batman & Robin knows it’s a tongue-in-cheek cartoon and it doesn’t even attempt to be anything else. Ultimate proof comes when O’Donnell’s Dick Grayson saves Silverstone’s Barbara Wilson from plummeting to her death after a superfluous high-rise motorbike race goes awry. The first words out of his mouth as they dangle perilously over the precipice? “So *this* is where you hang out?” Groan.

In the films defence, Akiva The Da Vinci Code Goldsman’s spirited plot is anything but lazy, endowing each member of the bulbous cast with a purpose and arc. Freeze wants to cure his cryogenically frozen bride from MacGregor’s syndrome, while an eco-friendly agenda blossoms behind Poison Ivy’s (Thurman; suitably sultry) green-fingered wrath. Ever loyal butler Alfred (Gough), meanwhile, is hiding his pain behind a staunch façade and his joy at being reunited with his secretly rebellious niece, while loathed sidekick Robin is sick and tired of living in the shadow of the Bat. 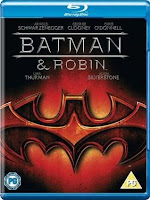 There’s certainly a lot going on for these people, yet still every shot is crammed to the hilt with blindingly effervescent lighting, grandiose buildings, pimped-up rides and an arsenal of Bat-toys which (handily) can foil anything Freeze and Ivy throw at the rubber-suited heroes (a heat ray to thaw ice? Check. Ice skates built into your boots? Check! Artificial lips to repel poison kisses? CHECK!). This optical assault is much to the detriment of any emotional narrative undertones, as even the most heart-wrenching drama (such as a dying Alfred’s reflections on a life serving the Wayne dynasty) is eclipsed by the bombastic and the ridiculous.


In a CR@B Shell: Viewed as a Saturday morning ‘toon for the under tens, Batman & Robin flies high as a cavalcade of camp comic book lunacy, but sat alongside Tim Burton’s dark knight-mares it’s a bat-shit, bird-brained embarrassment to the franchise which rightfully got sent straight to the cooler. Thank Gotham for Christopher Nolan!
aaaaa
Created by ~ CR@B Howard ~ at 13:11