I've Got a Bad Feeling About This...

Having raised questions about my feelings towards East Anglia's topmost celebration of all things sci-fi and fantasy following last year's "Nor-Con" (reviewed HERE), I must have been glutton for punishment by getting my hopes up that 2011's event would be any better. But with Craig “Lister” Charles, Robert “Kryten” Llewellyn and Danny “Cat” John-Jules all confirmed as guests, I was nigh-on ecstatic about the opportunity to complete my Red Dwarf autograph collection following last year's meetings with Chris “Rimmer” Barrie and Norman “Holly” Lovett (both of whom were also in attendance again this year).

The first blow of the day came as we were about to enter UEA's LCR when I was pre-warned by my friend (and fellow blogger) Mr. Downie that star guest Craig Charles had pulled out at the eleventh hour due to “work commitments and contractual obligations with the BBC”. Now, we all know that Mr Charles is currently playing cabbie Lloyd in Coronation Street (though that literally is the extent of my knowledge), but Corrie is on ITV, so unless the organisers got the wrong channel, it sounds like a pretty poor excuse to me. True, Red Dwarf once was a BBC production, but they long ago gave up on the show and it has since moved to Dave. And besides, why on earth would "Lister" have been called in on his own when the rest of the cast were still able to fulfil their Nor-Con obligations?! 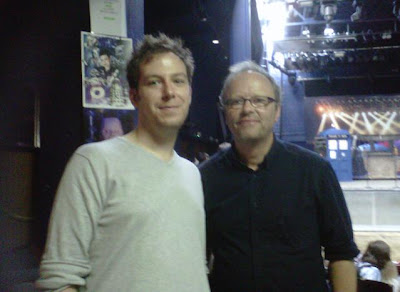 Tickets had apparently sold incredibly well for this year's event (up 300% on last year, according to the website), and the difference in numbers was noticeable from the minute we entered the bustling main room. Of course the LCR is hardly Wembley Arena, but it was still good to see that word was getting out (this is, after all, all for charity). Unfortunately, the traders, stalls and menagerie of costumed look-a-likes were all essentially identical to last year and within 10minutes we had snooped and perused the overpriced merchandise as much as we possibly could.

Moving into the venue's second room (just off from the restaurant and vending machines) where all the “meet and greet”s take place, Chris Barrie once again had a colossal queue while everyone else was lucky to have one or two people waiting to speak to them. It all looked worrying similar to the year before – we even wondered whether Chris and Norman were still wearing the same shirts! Illogically, Robert Llewellyn – who you would have considered to be a huge draw given his Twitter popularity, not to mention his online Carpool's (now showing on Dave, too) and his time on Scrapheap Challenge – was not even in this room but squeezed between traders in the busy main hall, where most people either walked straight by him, or couldn't get passed the crowd of people milling about!

More worryingly still, the place reserved for Danny John-Jules was filled by a replica Dalek – and no-one had any idea where the hell he was! It transpired that he was “held up” at a motorbike show and was therefore no longer coming – what a let down! My dreams of seeing all the "Boys from the Dwarf" was destroyed: having already met two last year, the only acquisition to my autograph collection was "Kryten" – and he was charging a rather hefty £15 a go (not for charity, I might add)! I realise that sometimes things crop up, it's unavoidable, but for two of the day's biggest guests to either pull out ridiculously late or simply not turn up is frankly appalling and I, for one, was hugely disappointed and felt somewhat cheated out of my £9 entrance fee.

Following a half hour "Celebrity Lunch Time", I was hoping that the “Red Dwarf Q&A” - planned for 1:30pm on the main stage - would lift my spirits, but after being kept waiting for some 20minutes (on top of the 25 we'd already waited to guarantee a good view) while they belatedly finished their lunches (what were they eating, a three course meal?!), I was less than impressed by the amateurish organisation which left Norman Lovett without a microphone and Chris Barrie with earache after his mic had a bad case of feedback. With “Matt Smith” on question duty, the embarrassment continued as Chris Barrie was asked an era-hopping question about Torchwood's Carptain Jack Harkness – a character he had never heard of and needed much assistance in placing. 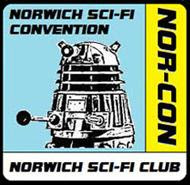 We left pretty soon after that - before Robert Llewellyn had even answered a question - having realised that for all the organiser's good intentions and boasts of a “bigger, better” event, 2011 did not live up to 2010's less-than-stellar expectations. I guess that without the novelty value of last year's first time (which, lest we forget, brought us “Darth Vader” eating a ham salad and me chastising “Holly” for munching on a digestive), Nor-Con's faults were laid bare, expounded by the disappointment of unreliable celebrities. I'm sad to say that it would take a major celeb at next year's event to get me to even consider going again – but even then they probably wouldn't bother turning up!
Created by ~ CR@B Howard ~ at 10:46