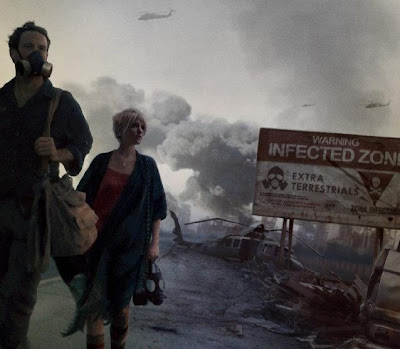 Film critics – particularly those working at tabloid rags – have a tendency to exaggerate their reactions to films in the vain hope of bagging a quote on the DVD cover. Never before has this been more obvious than with the Daily Mirror's wildly inaccurate praise of Gareth Edwards' debut sleeper hit Monsters. “Thrilling, action packed and totally original” they exalt in their five star review. Now, I'll give them “totally original”, because the vague comparison to the concept of District 9 is dispelled as soon as the film begins, but “thrilling” and “action packed”? Erm, seriously, were we watching the same film?!

I knew before pressing play that, irrespective of the title, the eponymous beasties are far from the main focus of the film. The narrative instead focuses on the arduous trek over quarantined Mexican soil undertaken by photographer Andrew Kaulter (Scoot McNairy) and his bosses daughter, Samantha Wynden (Whitney Able). Their goal is to reach the “safe zone” of the US border without being eaten alive by the creatures which have bred uncontrollably since a NASA probe carrying alien samples crash landed in Central America some six years ago.

I won't deny that the direction and cinematography aren't awe-inspiringly beautiful, because they are, but the film's milieu is purposefully restrained, wash-out and barren. Many formerly thriving communities have been devastated and deserted, left to rot with an eerie calm which sets the tone for the film. Writer and director Edwards' hones in on the blossoming relationship between the pair as they bribe, walk and camp across many miles of deadly land and water. Reflective? Yes. Well observed? True. But “Thrilling”? I think not!

Furthermore, the monsters only appear four times in the entire film – the first 45mins passes by with only a brief glimpse over the opening titles and TV news footage to quench your sci-fi desire. Even when the pair are seemingly doomed in a climatic showdown in a deserted gas station, the result is more dreamy than dramatic. Unexpected? Totally. Stunning? You betcha. “Action packed”? Dream on, Daily Mail!

The sheer scale of the hype surrounding this film didn't exactly help my reaction to it. It's undoubtedly an impressive debut which works completely against type, but I really struggled to warm to the characters, which really damages a film's appeal when they appear in every scene! I'll be blunt: Kaulter is a dick. I found him to be curt and unfriendly at the best of times, plus he outright refuses to “babysit” Sam as a favour for his boss – until he sees how attractive she is!! He gets drunk on a stop over at the ferry port – less than 48 hours after meeting her – and tries to get in her knickers, then beds a random tart when engaged Sam rebukes his advances!!

Sam is the more down-to-earth of the pair, but her unexplained issues with her fiancé are not benefited by the inexplicable feelings she forms for Kaulter. Just because a man and a woman spend a period of time together does not mean they have to get together, particularly not when the woman is soon-to-be wed and the man sleeps with anything that will have him. Personally, this diminished by attachment to their plight, and when the alien action is all but absent, I found very little to adore about Monsters.


In a CR@B Shell: A brave and ambient high concept, low key debut which leaves the fantastical on the sidelines and keeps the human focus centre stage. I just don't comprehend quite what everyone is raving about and cannot award Monsters anywhere near as highly as I thought, or hoped, I would.
aaaaa
Created by ~ CR@B Howard ~ at 09:19